Lovers of food can’t visit Thailand without experiencing the bustling energy of one of the country’s famous floating markets. Damnoen Saduak, located about an hour away from downtown Bangkok, is the largest in the country. Originally constructed to connect the Mae Klong and Tha Chin Rivers, the 20-mile Damnoen Saduak Canal was opened in 1868 and quickly became known for its floating markets.

The best way to explore its busy waterways is to jump on one of the boats, known as sampans, which gives you the chance to see the homes that line the river banks, in addition to the best photo opportunities of vendors hawking their goods. That said, it’s entirely possible to peruse the many stalls that sell souvenirs and clothing that line the canals, as well as the sidelined boats offering Thai delicacies, without getting afloat.

With hundreds of vendors floating throughout the market selling the best they have to offer to thousands of tourists daily, be sure to keep your hands in the boat at all times (just like at Disneyland rides) and keep your eyes open for tasty opportunities. Get ready to be in complete awe of how much commotion happens right in front of you.

INSIDER TIPBring baht in small denominations. Most vendors will not accept debit or credit cards.

Floating through the crowded canals, you’ll find vendors with boats full of tropical fruits, traditional Thai desserts, grilled seafood, fresh produce, meat skewers, stir-fried dishes, and more passing you by, continually making you question whether or not now is the right time to make a stop to chow down. This is a continual challenge that may indeed cause some anxiety, but don’t worry—there’s an endless supply of food here. If one boat floats on a little too fast, another one will be right behind it, full of delicious bites.

The smells, sounds, and sights of the floating market are unlike any you’ll find in the states. Each vendor has his or her own unique specialties and prepares it with complete calm amidst the general mayhem of the crammed waterways.

At Damnoen Saduak, Miss Suwaphi is the queen of Pad Thai and has been for over ten years. True story: I ate her Pad Thai twice during my afternoon excursion at the market and honestly, I would have eaten a third serving if my stomach had allowed. Though she used to serve up her famous noodles on a boat, she’s now set up in a permanent shop alongside the canal. 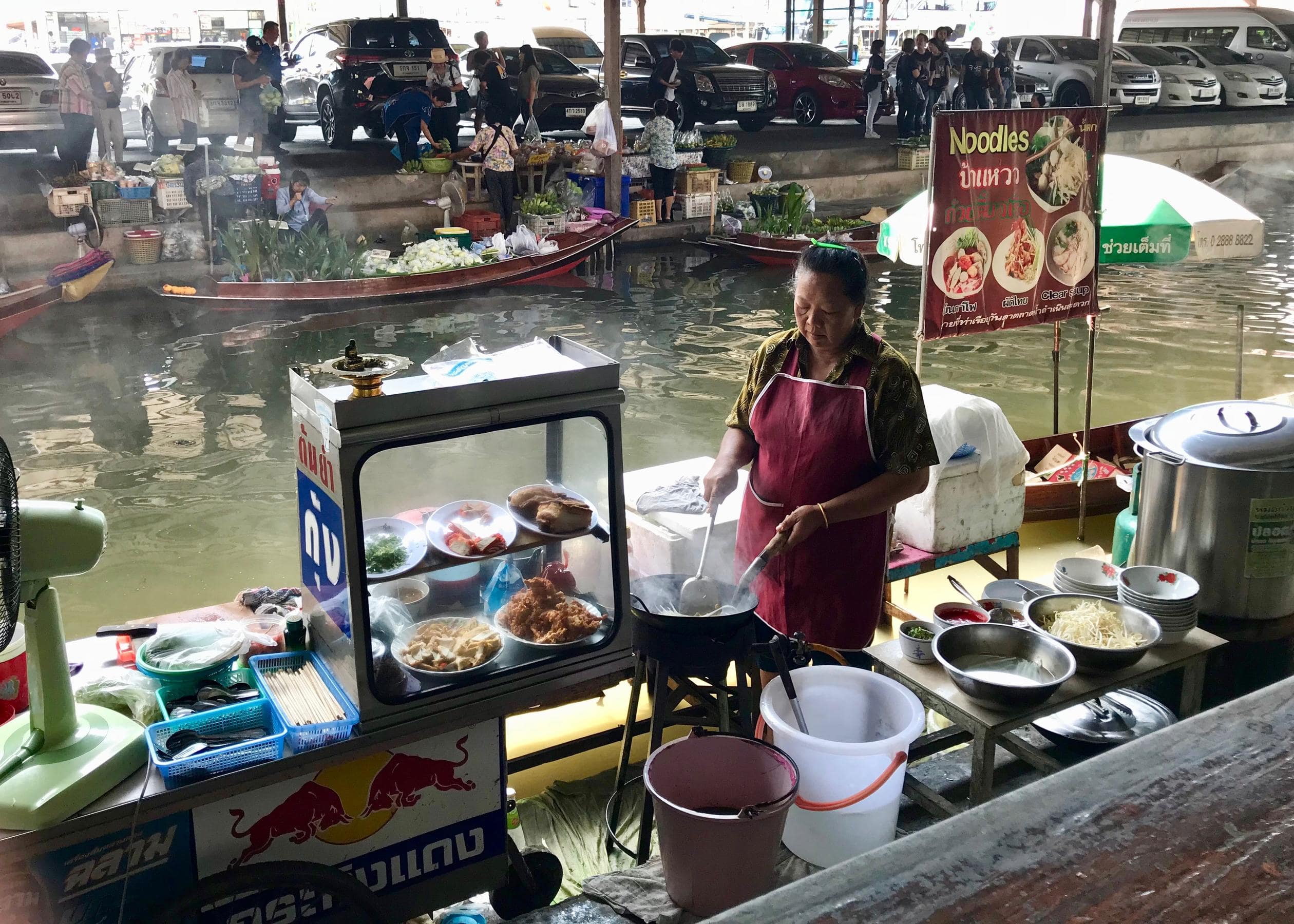 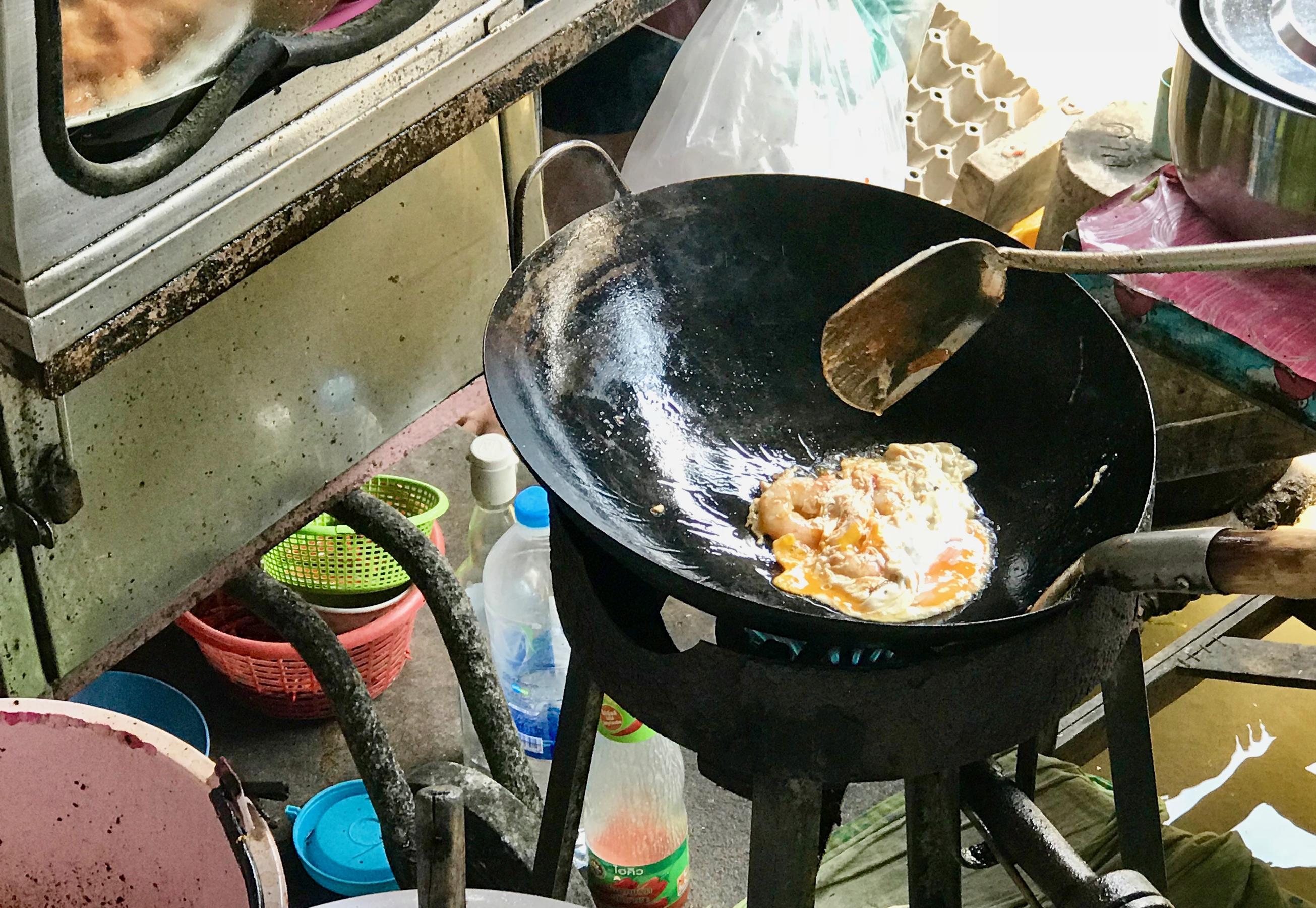 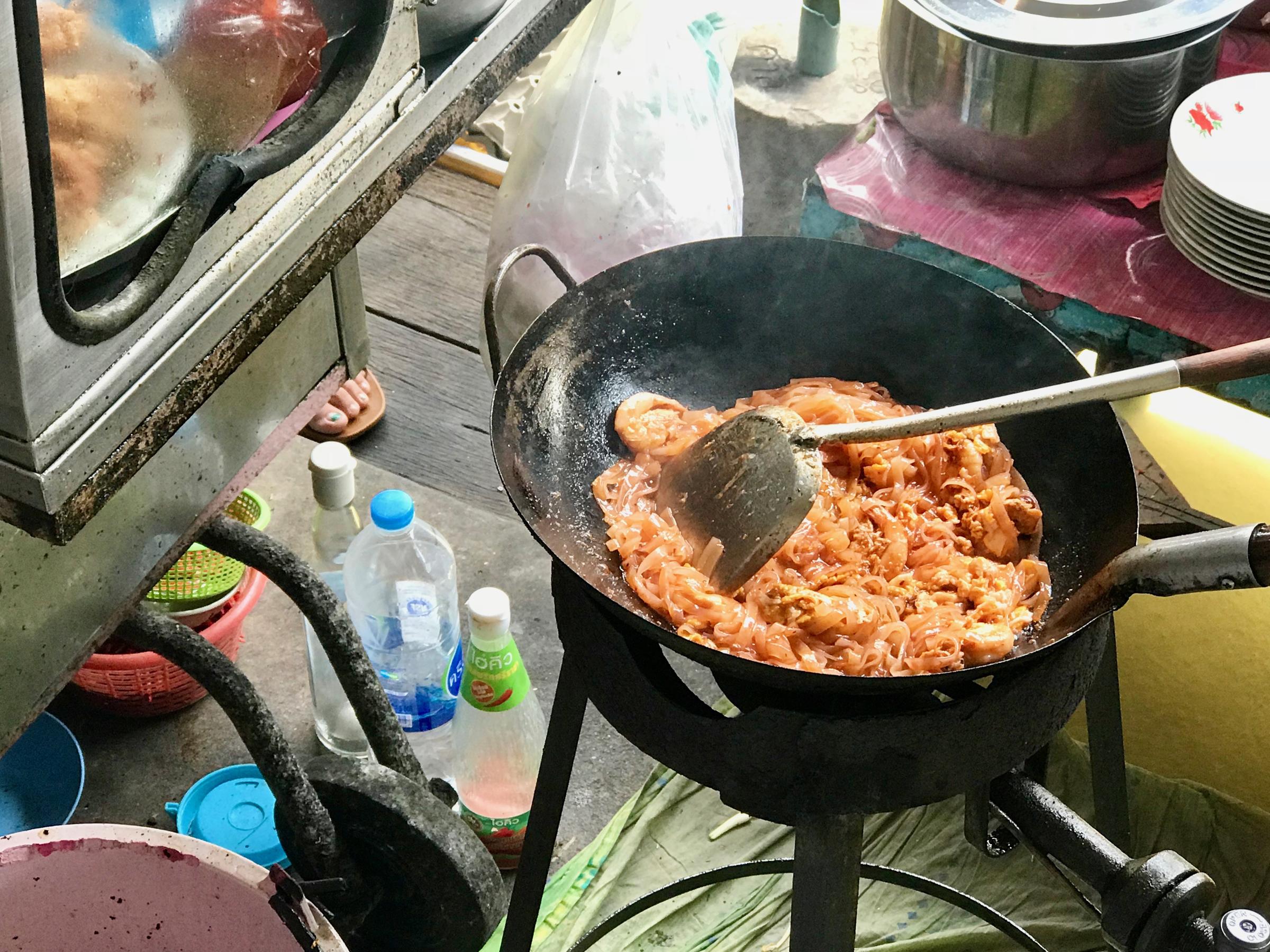 INSIDER TIPTo find her, you don’t even need a boat. Walk out of the main floating market parking lot, go across the canal bridge, and there you’ll see her stall near the restroom area. It’s not the most precise directions, but just follow the sizzle of the wok.

Always with a smile, despite stir-frying noodles in extremely humid conditions, Miss Suwaphi was kind enough to take a break and give me her best advice on making Pad Thai like a pro. 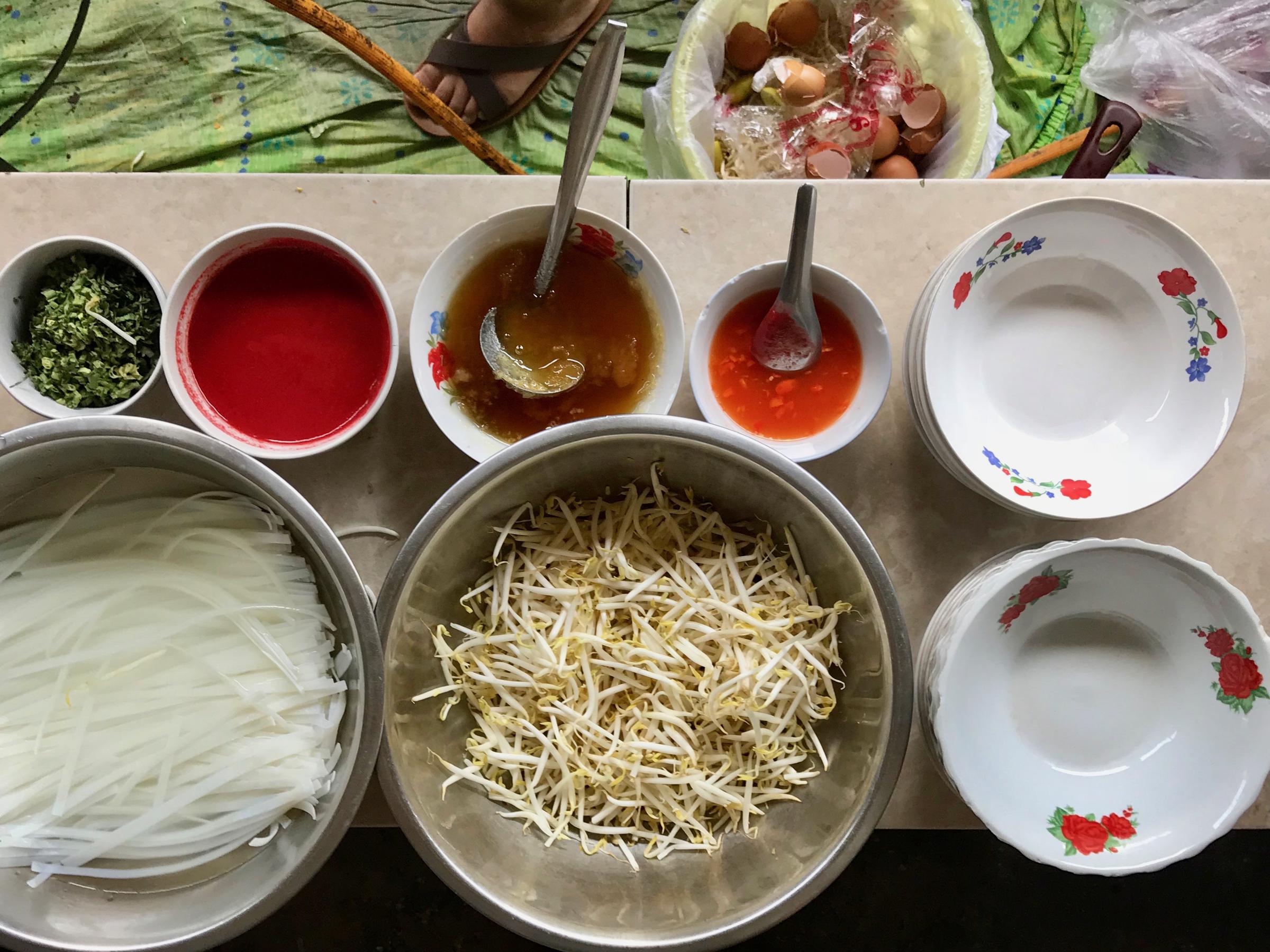 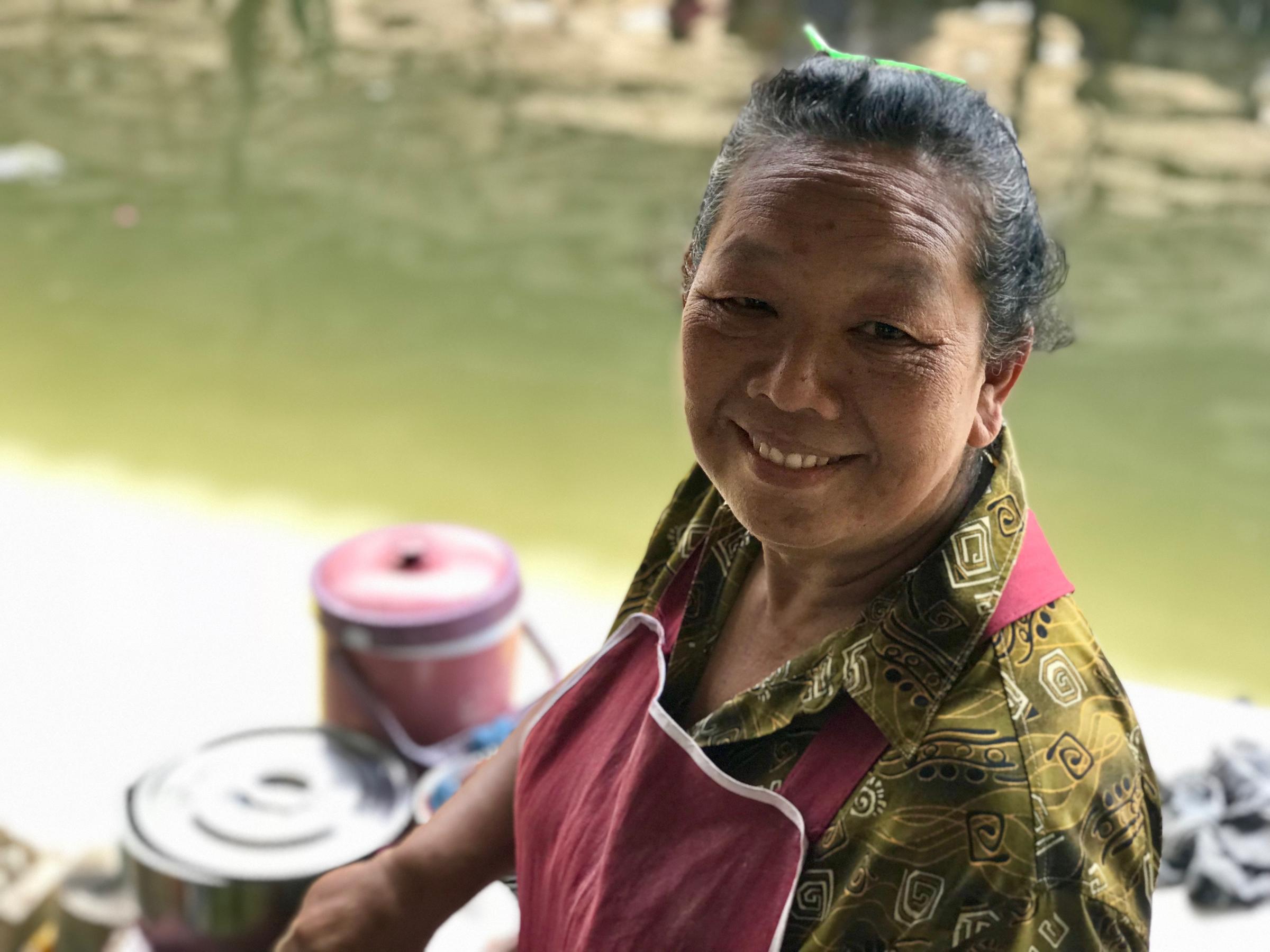 As Thailand’s national dish and everyone’s favorite street food (in my humble opinion), Pad Thai is a brilliant combination of tangy, sweet, spicy, and savory flavors. The traditional stir-fry noodle dish is filled with both complex flavor and texture and comes with your choice of protein, normally shrimp, chicken, or tofu.

Pad Thai literally translates to “fried Thai” and it’s a dish that’s rooted in Thailand’s history. This noodle dish was created by the Thai government during World War II in an effort to protect the rice resources of the country, as well as to promote unity during a time when it was establishing itself as Thailand, rather than Siam. Whether an entire country or a group of frenemies, nothing brings people together quite like food, right?

Now that you know the history and tricks of the trade, it’s time to make your own Pad Thai at home! Here’s what to do: 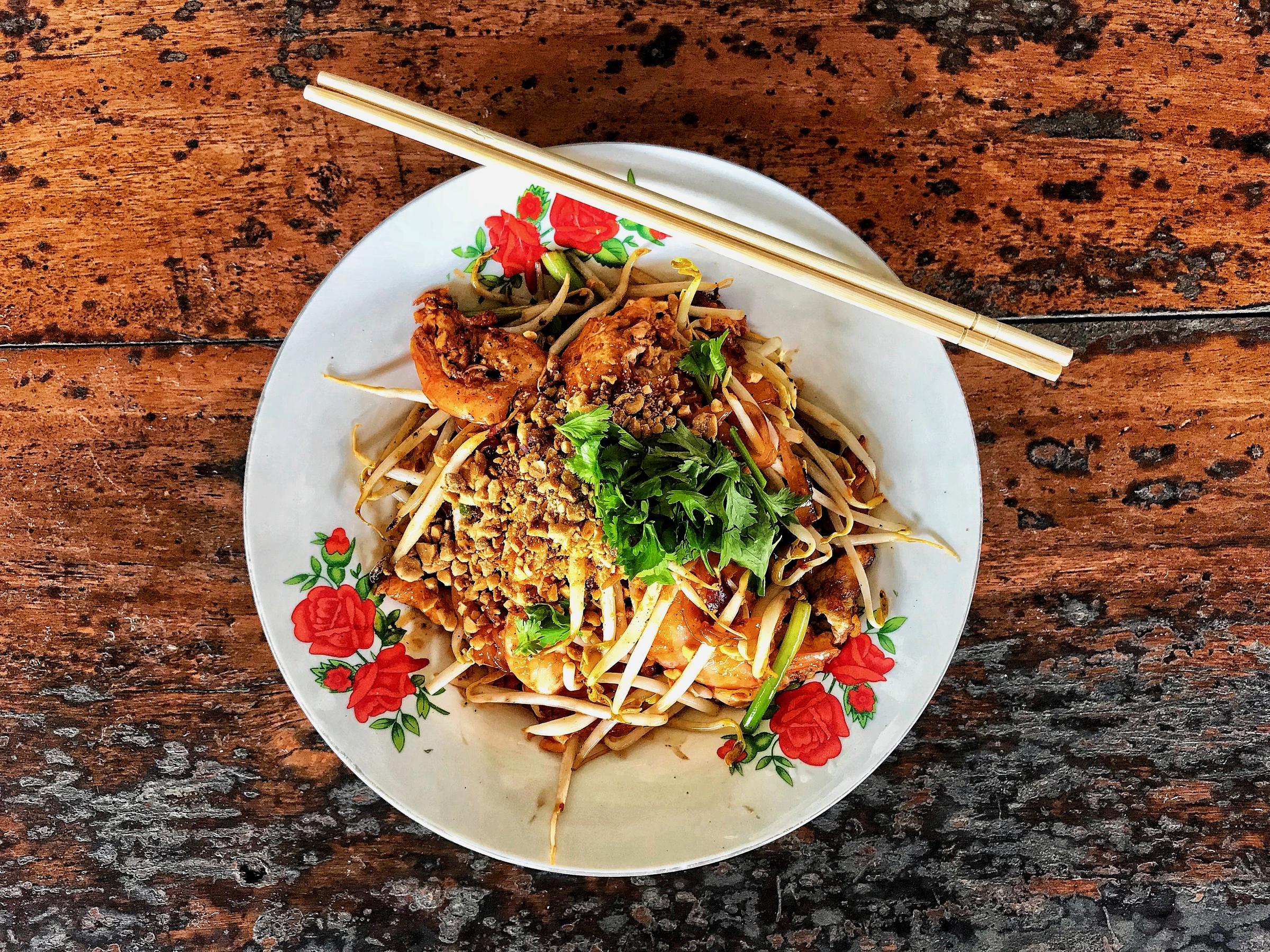 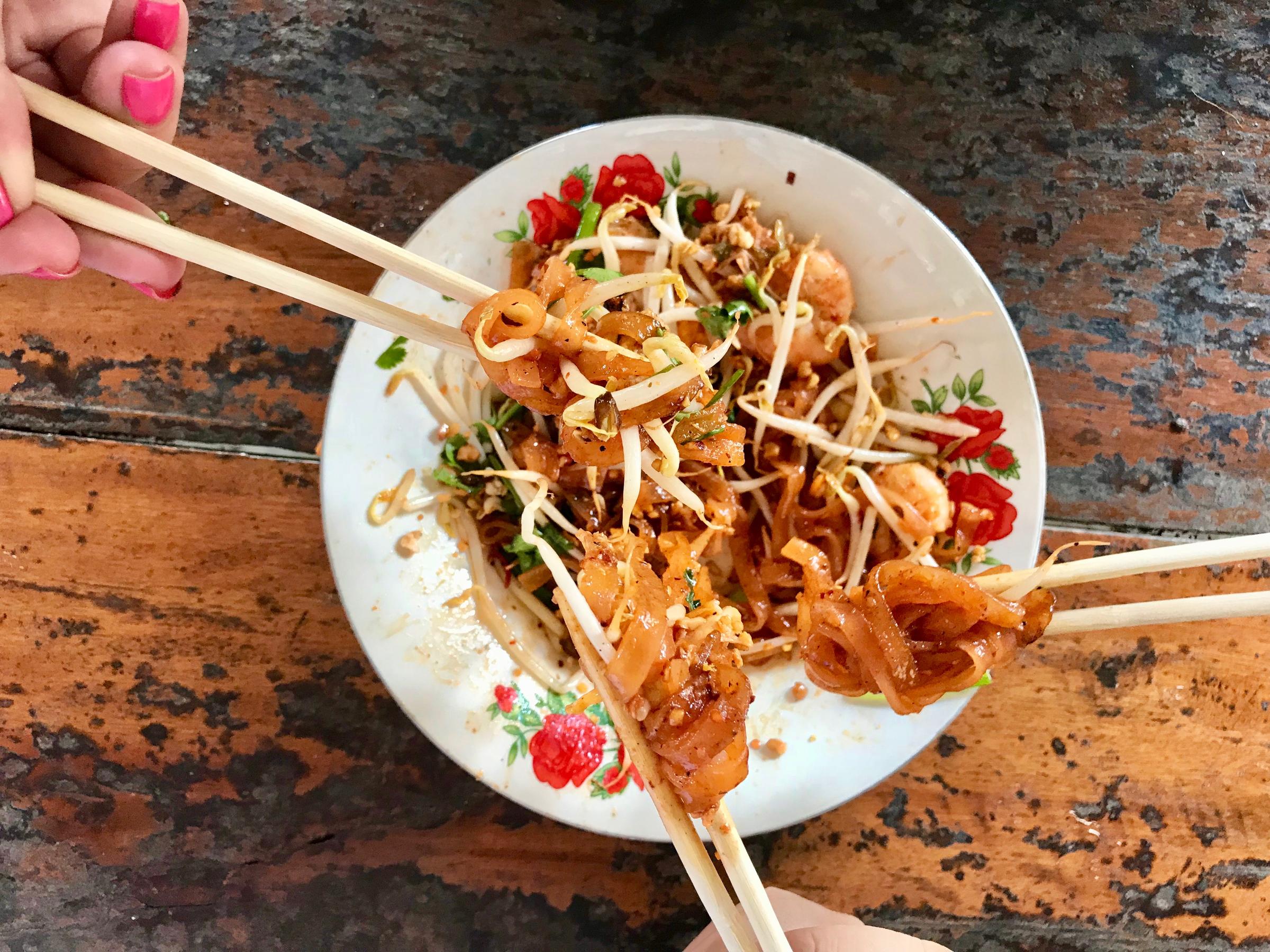 For a single serving of this amazing Pad Thai, start off by pouring two tablespoons of oil into a hot wok and proceed to add your protein (shrimp, chicken, tofu, or pork). Next, crack an egg and stir to coat the protein with the egg. Add two or three tablespoons of tamarind special sauce (one teaspoon tamarind paste, two tablespoons palm sugar, and salt to taste) and toss the noodles and immediately squeeze in lime.

INSIDER TIPMiss Suwaphi says to soak your dried noodles in water for at least thirty minutes before tossing them into a hot wok. The moment you put the noodles into the wok, squeeze some lime juice in while it’s hot to make the noodles really soft and tender. This is a commonly overlooked step when making Pad Thai with dried noodles.

Depending on your flavor preference, add as much or as little chili sauce and splash more special tamarind sauce into the mix.

INSIDER TIPDon’t forget to get your special sauce right! When it comes to Miss Suwaphi’s special sauce, she uses the real stuff, unlike most places in the states that commonly use a ketchup mix. (That’s why when you order take-out, your Pad Thai comes in an unnatural orange color.) Her sauce combination is tamarind juice, salt, and palm sugar. The big difference with her pad Thai is that unlike many others who put vinegar in the dish, she sticks to using a lot of tamarind and lime juice, which gives the dish a pleasant fragrance.

Then, add green onion and bean sprouts. Lastly, garnish with crushed peanuts and parsley or cilantro and voila!

While you’ve just managed to make your own Pad Thai at home, nothing can compare to the real deal at Damnoen Saduak floating market.

The Quaintest Christmas Villages Across the U.S.

The Fodor’s Travel Awards: The Top Picks for the Best Trips

Send To A Friend